he first picture that comes to mind as soon as diseases and hospital are mentioned, is often the patient coughing or sneezing or lying on a hospital bed. Did a picture of a depression patient come to your mind, who had come to a psychologist for counseling, or a patient with a bipolar disorder who was waiting for their number outside the psychiatrist’s room?

Just a few days ago, the Mental Healthcare Bill-2016 was passed in the Lok Sabha, which gives protection and treatment rights to people suffering from mental illnesses. This law itself is quite progressive, which empowers patients.

According to the provisions of the bill, now mental illnesses will also be covered in medical insurance. Any healthy person can choose his nominee, who will take care of him in the condition of mental trouble.

A person going through a serious mental problem will not be able to be isolated or isolated from the family. Nor will any coercion be done to him.

Suicide outside the scope of the crime

The most important thing. Now the suicide attempt has been taken out of the purview of crime. That is, those who try to end their life will not be sent to jail but they will be provided medical help.

After all, why do we try to rule out mental troubles? Is the mind not part of our body? The question is straightforward but the answer is complicated.

We never heard of these diseases from childhood, we did not even read in books. We just saw in the movies that there is some crazy girl who has been imprisoned in a mental institution. His hair has been cut short. She is given an electric shock and she is screaming.

Dr. Sonali Bali, a psychiatrist of Vidyasagar Institute of Mental Health and Neurosciences (VIMHANS), says, “People also have many misconceptions about medicines. They feel that chemical is being punished in their mind or they are being addicted to medicines, whereas this is not the case. ”

You must have seen someone who keeps talking to himself or someone who always talks about dying. Weeps over every little thing. You must have met those happy and cool people, who do not believe the news of suicide.

What are the symptoms of mental illness?

Dr. Neetu Rana, a psychologist practicing at VIMHANS, says, “All these things can be stopped.” Things can be handled. Treatment is possible. There is a need to identify diseases.

How to Be Mentally Positive

How will be treated?

Your treatment will be done only through therapy or counseling or you will also need medicines, the doctor will decide.

If illnesses are serious, for example, someone is hearing strange and poor voices. He is seeing or hearing something that others do not, or if someone is trying to harm himself, then it is the responsibility of family and friends to take him to the doctor because in such a situation the patient never accepts himself. Will make him ill. 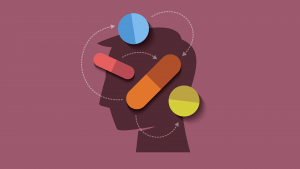 Why is a person not happy in depression?

There is also a misconception that depression or brain problems is only due to someone who has had a big accident or who has a lot of reasons to be unhappy.

People often ask, “Why do you have depression?” What is missing in your life? ”This is completely wrong. During depression, the formation of hormones, such as oxytocin, which gives pleasure in the human body, is reduced.

When is shock therapy given?

Regarding the shock therapy shown in films, Dr. Neetu admits, “There is no need to create a ruckus in it.” Shock therapy is given when medicines are not being affected by the patient. If someone is bent on taking his own life and needs to be brought under control immediately, then only this can be needed. ”

Dr. Sonali says, “We also give shock therapy to pregnant women with mental illnesses, because some medicines can have side effects.” This shows that it is completely safe.