Pregnancy me Stan me Dard – The woman feels different happiness after conceiving. This is the time when the pregnant realizes the eagerness and a wonderful experience of the baby coming. In a way, pregnancy is an emotional phase, which includes excitement as well as problems caused by physical and hormone changes.

Is it normal to have breast pain during pregnancy?

Breast pain during pregnancy is a common problem. Breast hardening after conception, causing pain in them. During this time, the pregnant’s breasts also become sensitive. A mere rubbing of a cloth can cause pain in the breasts. During pregnancy, hormones prepare your breasts for breastfeeding, due to which you may face discomfort and pain. You have already known that breast pain is normal. In further article, we will tell you why breast pain occurs during pregnancy.

Why does breast pain occur in pregnancy?

There can be many reasons for the pain in the breasts during pregnancy. We are giving you detailed information about these reasons below

There are many changes in the pregnancy for the correct development of the unborn baby, which results in changes in the estrogen hormone. Due to the change in hormones, the breast of a pregnant woman starts getting heavy and it starts to ache.

In the second or third trimester of pregnancy, fluid called colostrum starts forming in the breasts. It is thick and yellow in color, which is also called first milk. Due to this reason, heaviness and pain is felt in the breasts. Sometimes colostrum originates from the breasts, which is common. It is rich in antibodies that nourish your fetus (newborn) after it is born and can prevent infection.

Changes in the breasts:

During pregnancy, the shape of the breast changes, because milk starts to form in the breasts of the woman for the fetus in the womb. During this time, milk-forming cells begin to develop in the body. This increases the size of the breasts as well as causes pain. As the time of delivery of the pregnant gets closer, the breasts’ heaviness increases

Fibrocystic can also be a cause of pain in the breasts during pregnancy. During this time small cysts are formed in one or both breasts, which can also be called lumps. This lump can cause swelling and pain. Actually, the tissues of the breasts are affected due to hormonal changes during menstruation and fibrocystic may be encountered. 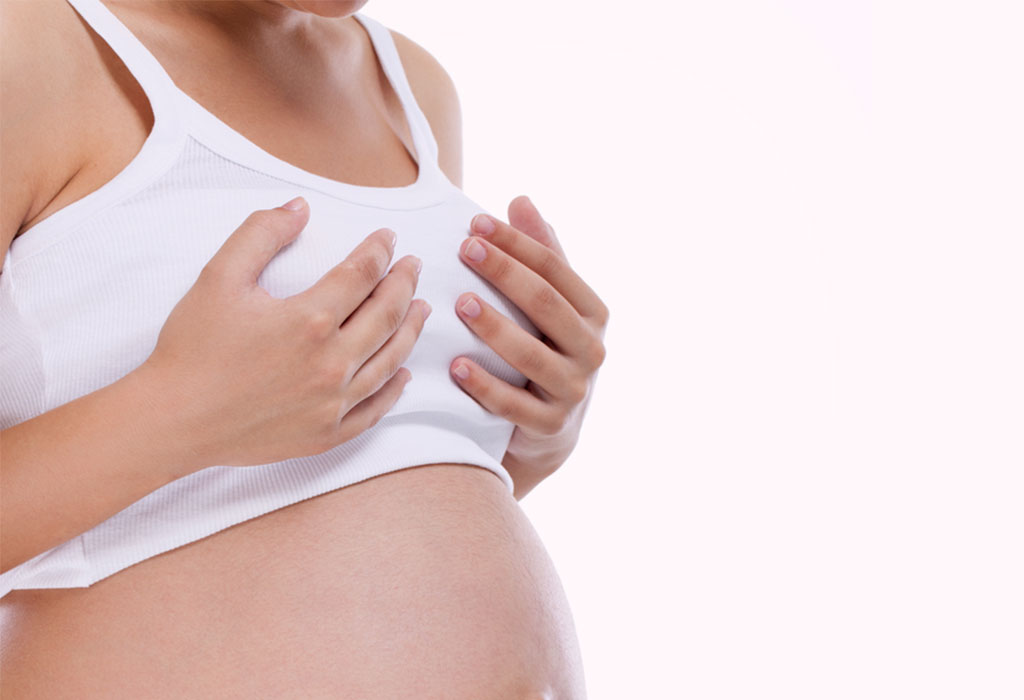 Signs of breast pain in pregnancy

When does breast pain occur during pregnancy?

Breast pain is normal during pregnancy, you already know this. Let us tell you when it hurts

How to avoid breast pain in pregnancy?

You can reduce the pain in the breast during pregnancy to a great extent. If necessary, then keep these following things in mind

1.In pregnancy, you should wear a bra that gives good support to your back and breasts. You can also reduce the pain of the breasts with the help of a bra with a well-padded strap.

2.Cotton bras can be comfortable during this time.

3.Use slip bra at night. They are soft and light, which gives good support to your breasts at bedtime.

5.If you are itching with pain, avoid bathing with hot water.

6.After bathing, wipe the body water and apply moisturizer. You can also use your moisturizer by keeping it in the refrigerator for a while. After applying it you will feel cool and relaxed.