Your menstruation does not mean that you have to give up sex. Conversely, for some women, sex during the menstrual period may be more enjoyable than at other times of the month.

Things about having safe sex during the menstrual cycle.

It is very important to have safe sex during your menstruation as you may have STIs like HIV infection. The virus may be present in the menstrual blood, so doctors insist on using condoms to reduce this risk. You can use male condom or female condom, anyone.

You may also be more prone to some other infections in general at this time. According to experts, the pH level of your vagina is 3.8 to 4.5 throughout the month. But during menstruation, this level is increased due to high blood pH, so the yeast is able to grow more rapidly.

Symptoms of a vaginal yeast infection are likely to occur in the week before your menstrual period and sexual intercourse during this time may increase the effects. However, there is no clear evidence of increased risk of sexual infection during menstruation.

According to experts, some women may be more likely to get urinary tract infection after sexual intercourse. This is likely related to bacteria able to travel to the bladder easily with intercourse, but it can occur at any time during the menstrual cycle.

When you have sex during periods, your chances of getting pregnant are much less likely, as you are usually several days away from ovulation during menstruation. But there are exceptions to this. If your menstrual cycle (21 to 24 days) is short and you have sex at the end of your menstrual period, then sperm can remain viable in your vagina for five days, so pregnancy is possible. But if you are expecting a baby then this is not the right time to try to get pregnant.

Why is there less need for lubrication during menstruation – Less Need for Vaginal Lubrication during Period
If you have sexual intercourse during menstruation, you do not need any lubricants, that is, measures to increase wetting in the vagina, because of enough wetting in the vagina. If you feel the need for lubricants, water-based lubricants are available in the market that are safe for both sex and condoms.

If you experience cramps, feelings of sadness or depression during the menstrual period, having sex during this time can be beneficial. Experts say that since orgasms release good feeling hormones such as endorphins, oxytocin and dopamine – you could theoretically say that they would also reduce some of the effects of menstruation. So there is no harm in trying. 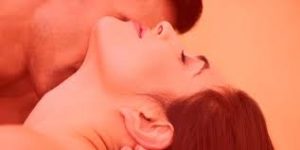 You may feel more sexually aroused and sensitive during this time of the month due to changes in your hormone levels. Experts say that many women experience an increased feeling of blood-contraction in the pelvic area, which can also increase your sex drive or desire. But for some women, this extra sensitivity can make it inconvenient to have sex during this time. The key is to ensure that both you and your partner are comfortable with the condition.

People have different views about sex during periods. While some people consider it completely wrong to have sex with a girl during this period, there are others who believe that during this time they can have sex free of protection because the chances of pregnancy during this period are very less.in any case, there are things that one should know as mentioned above and also

Keep these things in mind while having sex during the period: During this time, use condoms while having sex. With this, both of you are protected from all kinds of infections.
# 1 If you are planning to have sex, change your sanitary pad as soon as possible so that bacteria does not grow there.
# 2 Make sure to use female condoms to prevent exchange of vaginal liquid between the two partners.
# 3 Always have sex only after taking a bath and cleaning the body properly.
# 4 Women use lubricants during sex and must urinate after having sex so that bacteria cannot enter the bladder.
# 5 While having sex during the period, do sex in missionary position itself, especially in man on top position, it is more convenient to have sex.

Read more:What is Menstruation? | Get Facts About Having Your Period